Jerusalem artichokes were first grown and eaten by various tribes in North America, apparently there are a number of different varieties up there, one even has red skin and looks amazing.  In Australia we have access to very few varieties, to the best of my knowledge none of them are named.  We do have a few dodgy heirloom vegetable sellers who like to rename things and claim exclusivity, so the few named varieties you see are likely all the same.

Jerusalem artichokes are one of the foods that helped numerous families to survive the great depression.  They are massively yielding, very undemanding and roughly nutritionally similar to potatoes.  Whenever I have grown them they have easily out produced potatoes and I have cared for them less.  Like pigeons, rabbits, guinea pigs and anything else that helped families to survive the depression we view them scornfully and they are rarely eaten today.

Jerusalem artichokes do not easily produce viable seeds, and seed grown plants display a great deal of genetic diversity with many producing thin tubers and very few producing thick edible tubers.  I would love to grow them from true seed and breed for larger tubers or other colours, but doubt I will ever have the space or the time to get into this endeavour.  Considering how productive and low maintenance these vegetables already are I am not sure if there is a great need for improved varieties.

Jerusalem artichokes are an extremely productive vegetable that is very simple to grow.  I have heard of people who peel the tubers prior to eating them (much like potatoes or carrots the skin is edible and nutritious so I don’t see why anyone would bother) and placing the peelings in the compost heap only to have Jerusalem artichokes grow from those peelings.  I have heard of people planting them and never being able to get rid of them.  I have never had this issue as they grow reasonably tall so I find them simple to remove, if I don’t want them in a garden bed it is simple enough to pull them up throughout the growing season.  Unlike mint which you can spend years pulling up and never get it all, sooner or later I get them all and there are none left.  I normally don’t bother to plant them as they regrow from tiny tubers I missed when I harvested.  If I do plant them I normally either plant the smallest tubers, or I break large tubers into little pieces and plant them.  Unlike annual vegetables, you are not adding any selective pressure when you plant smaller ones as tuber grown plants are genetically identical to one another.  The fact that they regrow so easily from tubers that have been missed means you never need to spend time deciding which ones to keep and which ones to eat.  It also means that you get to keep all of the crop rather than placing some aside to replant.

Jerusalem artichokes are said to yield between 2 kg and 6 kg per plant, this seems like a conservative estimate under most situations.  If you were to look after your plants and provide them with excellent soil and mulch I have little doubt that you could easily exceed this amount, if you grow them in poor soil in dry hot conditions the yield can be considerably lower.  If they have reasonable soil moisture during the growing season and you grow them somewhere with cold winters you should expect the crop to be larger.

I planted three small pieces last year, rarely watered them, did nothing when they were covered in Rutherglen bugs and the tops were getting deformed from constant bug attack, and have already dug up several buckets full of tubers from the edges of the patch.  This summer I will limit my patch to only one plant.

The leaves are said to be allelopathic, but I am not certain if this is true for all plants or only for specific weeds.  I have heard many people trying to set up a polyculture similar to the three sisters planting method, but have yet to hear of any that actually worked well.  Jerusalem artichokes are said to grow over 12 foot tall, mine have poor soil, I rarely water them, and I often cut off the tops to feed to animals so mine often struggle to reach 5 feet tall.  I tend not to grow many things under them or climbing up them as under crops tend to struggle.  This may be due to allelopathy, or lack of sun light, or simply due to competition from a rapid growing very nutrient hungry crop. 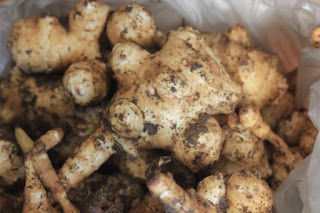 I normally plant Jerusalem artichokes (and everything else I grow) far too close as space and water are limited here.  They tend to crop well enough for me when cramped.  I also tend to grow them in places where other vegetable crops don’t survive rather than using my good soil for them.  For optimum yields give them good soil and as much space as possible, a few feet between plants would do them well.  If conditions are right they spread underground quite far and I have heard of people digging tubers several feet from where they originally planted one.

Jerusalem artichokes do have a few issues though, such as they do not store very well outside of the soil.  This is a big problem if you plan to grow them for market.  For a permaculture garden or home vegetable garden this is not an issue as you just dig them up when you want them.  They are high in inulin, inulin is a prebiotic which humans can’t digest but it feeds beneficial bacteria.  In some people who are not used to eating anything that contains inulin it can give them gas for a while if they eat too much.

They appear to increase soil biota, I assume this is due to exuding sugars into the soil.  In all of the gardens I have had, plants that are high in inulin always seem to have earth worms near them.

Jerusalem artichokes can be eaten by people raw or cooked in any way that a potato is cooked.  People tell me that Jerusalem artichokes have a subtle and delicate flavour, I struggle to taste them at all.  They can be mixed with potato and mashed, in this way they taste like mash potato but bulk out the meal considerably.

Jerusalem artichokes are great animal feed as they are so productive and many animals like to eat them.  I am told that pigs love to eat Jerusalem artichokes and if planted in a field the pigs will happily plow an entire field and search out every last one.  I feed Jerusalem artichoke leaves and stems to guinea pigs, this doesn’t seem to lower the crop of tubers too much.  After digging the tubers I throw some to the chickens each day, they really love them.  Feeding the tubers to poultry is simple as it requires no preparation plus it lowers the feed bill significantly over winter when there is little growing.  I also give some tubers to guinea pigs, they also love them.  I try not to give the guinea pigs very many as I am worried about them bloating.  Ducks, guinea fowl, quail, rabbits, budgies and many other animals also gladly eat Jerusalem artichoke tubers.  The best part is they don’t need to be grated or cooked, just dig them up, brush off most of the soil, and throw them in - the animals will know what to do.

Jerusalem artichokes are often difficult to find for sale in Australia, but once you have them you can grow them forever.  Several online places sell them, and I think I have seen them for sale (with inflated prices) in Bunnings.  I sell organically grown Jerusalem artichokes over winter, they are listed with heirloom vegetable seeds, culinary herbs, and other perennial vegetables on my for sale page.