I wrote a post about finding seeds from the first tomatoes that I ever bred.  I have grown them twice since then, the first time I was amazed at how fit for purpose and great they were.  The second time I grew them I decided to record some stats.


The first tomato variety I bred I have named ‘Igloo’ after my first son.  It is a sturdy and productive plant that grew to be well under two feet tall.  The Igloo tomato fruit is red and round, this is because at the time I was developing it I only had access to red round tomatoes as breeding stock.  I wanted relatively small fruit as large fruit takes longer to ripen and faces more danger of something damaging the fruit before it is picked.  Most of the fruits were about 45 grams in weight, they are relatively uniform but some were smaller and some were larger as I didn’t breed for uniformity.
When I was developing this variety I lived in a climate with a very short summer, so I wanted fast ripening small tomatoes.  This is one of the earliest ripening tomatoes I have grown and was the first to ripen of my productive tomatoes (ie Micro Tom ripened first but doesn’t count).  This year it took 147 days from planting the seed to picking the first ripe fruit.  When you look at my vegetable days to harvest page you will notice that this is very early.  I also wanted something that would set fruit in the cold, which this variety does well.

I didn’t have a great deal of access to water and had to carry manure to fertilise the soil, so I wanted short plants that did not waste resources on growing tall and did not need huge amounts of water.  These Igloo tomatoes only grow one to two feet tall, usually around 1 foot tall depending on growing conditions.  They don’t appear to be too water hungry but I haven’t tried growing them without watering.  All tomatoes need water, don’t let anyone make you think that they don’t.
The taste of Igloo tomato is very good, probably a bit more sweet than it is sour, but a good mix of both.  If eaten too early they taste ok, if left to ripen properly the taste is far superior.  As with any tomato they are best not refrigerated as it impacts on the taste.  Also like any other variety of tomato they taste best when ripened on the plant and grown in much sun and warmth.

Igloo tomato is what would be considered to be a determinate variety, or possibly semi-determinate, it sets flowers/fruit at the end of the growing point.  Unlike most determinate tomato varieties, once it has set fruit it tends to put out a few more shoots lower down and starts again.  This means it crops over an extended period.  Each flower truss tends to have 16 flowers, some have more but 16 seems very common.  Even though you would probably consider them to be determinate they do ripen over a very long period of time. 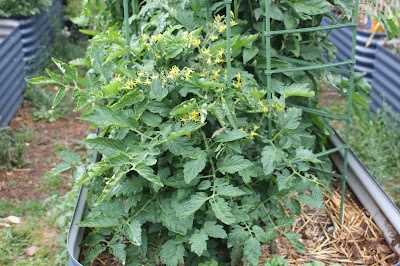 I was amazed at how absolutely covered in fruit this small plant was, it was very productive for such a small plant.  Rather than estimate the number I decided to count every fruit and record it after I picked it.

Over the summer of 2017/2018 my Igloo tomato has already produced a flush of 242 tomatoes and has started to put out a few more branches and has started to flower again.  We lost some tomatoes to insects and birds (and the kids probably picked some that I didn’t know about) so I have not included them in the count.

I didn’t weigh each fruit, but if the average weight is 45 grams this represents a harvest of 10.89 kg of tomatoes from one Igloo tomato plant so far.  This is excellent when you consider that the plant took up a small amount of space and was around 1 foot tall.
I sell seeds of Igloo tomato, as well as some other vegetables seeds and perennial vegetable plants on my for sale page.
Posted by Damo at 13:18