Tomatillo (Physalis ixocarpa) are another vegetable which comes out of South America.  Just like a tomato, eggplant or pumpkin technically speaking it is the fruit of the tomatillo that we eat.  The fruits of the tomatillo are enclosed in a papery husk which I think is part of their charm.  Sometimes people call the tomatillo a "husk tomato".

Apparently the Aztecs domesticated the tomatillo prior to the year 800 BC.  After the Spanish conquistadors went to South America they returned with most of the vegetables we eat today.  Both tomatoes and tomatilloes were brought with them, they are similar looking fruits with similar sounding names that were commonly shortened by Europeans.  Due to this there is a lot of confusion regarding historical manuscripts if they were referring to tomatoes, tomatilloes or some other vegetable.  Regardless we know that they were one of the first vegetables brought back by the Spanish in the 1500's.

For some reason the tomatillo never really took off outside of its home range.  Other vegetables which were discovered at the same time such as tomato, potato, beans, corn, pumpkin, squash, chilli etc now form the mainstay of our vegetable diet.  I honestly do not know why the tomatillo never gained favor as tomatilloes grow like crazy suffering no real pests or diseases, they produce huge amounts of fruit that is simple to harvest, it is simple to save seeds from tomatilloes, and they look kind of cool.  The paper husk (technically a calyx) that surrounds each fruit seems to prevent fruit fly, slugs and most other pests from damaging any fruit.  They are so productive that I have even heard and read in many places that 2 or 3 plants will provide more than enough tomatilloes for a family!
The texture is difficult to describe, kind of like an under ripe spongy tomato, perhaps that is not a great description, it is pretty cool.  They kind of taste similar to a tomato in some ways, but have a kind of citrus taste in there too.  When cooked they take on more of a citrus taste.  They are difficult to describe.  I am told that they are the main ingredient in salsa verde.  They can also be cut and put into salds, salsas or pureed into guacamole or gazpacho or used to flavor rice.  I have also heard of them being used to tenderise red meat. 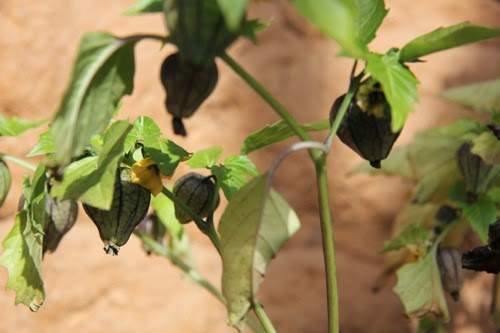 I have grown some green and yellow/green tomatilloes in the past and they were good but this time I wanted to grow some nice looking purple tomatilloes.  The plants grew well for me and flowered like crazy.  Each plant was covered in masses of yellow flowers but none of them were setting fruit.  I don't know why this is but some people say that their plants flower well but nothing ever comes of it, perhaps they remove the plant too soon and are not patient enough.  I have also heard that you need at least two plants to cross pollinate each other, I have never grown less than that so can't really comment.  These plants will cross pollinate with other varieties of tomatillo pretty easily so if you grow more than one type please take care if saving seeds.
After weeks of nice yellow flowers that did nothing I started to consider puling out the plants and then the first fruit began to form, then seemingly overnight I had hundreds of fruits forming!  The size of the fruit ranged quite dramatically on each plant, small ones in the beginning of the season and larger ones as the season progressed.  I have seen people on ebay selling seeds of "giant tomailloes", mine were reaching that size towards the end of their run.  They produced a huge amount of fruit in the end but they were not as dark purple as I had hoped.  Some were green, some were light purple, some were only purple where the sun hit the fruit, some had a mix of both on the one plant.  They all look really cool.  They kept on producing lots of fruit right until the frost killed them.

I usually harvest the fruit after it falls from the plant by itself, the husk protects the fruit from damage so they can stay on the ground for a few days before I get to them if need be.  Some people harvest them earlier and I am told it does not affect the taste at all.  The one thing I have been warned is not to pick them before the fruit finishes filling out the husk otherwise it wont be ripe and apparently does not taste terrific.

They store best when left in their husk, most people store them in the fridge but they can last a while on the bench or in the pantry.  When it is time to eat them the husk needs to be removed and the fruit will be a little sticky, I find that it is simple to wash this off.

Being closely related to tomatoes and potatoes and considering how simple it is to take cuttings from those I wondered how easy it would be to take a cutting from a tomatillo.  I cut a small branch off and put it in a cup of water on the kitchen windowsil.  In two days that small cutting had sprouted roots and a few days later I was able to plant it. This plant is still slowly growing, flowering and setting fruit as it is in a pot out of the frost.

I do sell seeds of the "purple"  tomatilloes on my for sale page.  If you do grow them please grow more than one plant so that you will have adequate pollination but resist the temptation to grow too many.  They are so productive that 2 or 3 plants easily provides more than enough tomatilloes for the family.