I started messing around with corn breeding a few years ago. Corn genetics is messy, the more I learn the more I find that I don't know.  Genetics was so much easier when we knew nothing!

Many varieties of corn suffer from varying amounts of inbreeding depression, to save seed it is best to grow at least 200 plants and save seed from the best 50 to 100.  Some varieties of landrace corn have little to no inbreeding depression, but the down side is that they can be rather variable.  Using landraces as breeding stock means that genetic bottlenecks are not as tight and small populations can be slightly more forgiving.

Corn will happily cross pollinate with other types of corn that are within a few hundred metres up to a few kilometers of each other.  This makes saving corn seed difficult unless you live on acreage and have no one growing corn near you.

As I currently live on acreage and have no one growing corn close to me I save seed from a few different types of corn.  If I get the timing right, and am vigilant with selecting seed and rogueing out off types I could probably grow half a dozen types of corn each year without too much trouble.

So I decided to try to breed one myself.
I have some access to different coloured field corn and some different varieties of sweet corn that the average grower would not have seen.  I researched the varieties that I have access to in order to determine the best parental stock for my new variety of corn.  I got a landrace coloured sweetcorn, which tasted ok and has a lot of genetic variation.  This was one of the parents of Immali corn.  Every generation since then has been remarkably better tasting.

I planted some of the coloured seeds and saved quite a lot.  The results were good, but being so early it is clearly not stable and had a way to go.  A little back crossing would help to lock in the desired colours and also maintain a high level of genetic variation.

The early cobs lacked much colour, they tasted better than store bought corn but not as great as I had hoped.  Adding colour is not all that difficult, stabilising that colour is a bit more difficult, but I can do it.

The later cobs look far better and taste far better too.  It is too bad I only get one crop of corn per year so progress is painfully slow.

They still have a way to go, it is not yet stable and I do not want to distribute this seed until it is a bit more stable.  The colour will always vary a bit, but that is kind of the point.

The taste is a bit up and down right now, some cobs taste good while others taste simply amazing, all of them taste at least as good as store bought sweet corn.  This is mainly due to timing, if picked just right they blow me away, if picked too early or late they are not as good.  I would like to work out how to fix this, the genetics behind this are a bit beyond me at the moment as I do not have access to a good corn genetics book.  By only saving seed from the best tasting plants all of the Immali Corn should taste amazing by the time the colours are locked in properly.


Once the strain starts to look more consistently like the cob above and is a bit more stable I hope to distribute seeds.  It may never be truly stable, it may be best if it always stays a landrace variety at least to some extent.  I hope that some dedicated seed saver somewhere will see the merits of Immali Corn and continue to grow it after I am gone.  Perhaps I should tell you what i hope to achieve in this variety.

So if I can get more of the cobs to look like the one above, and get the taste to be a bit more consistantly amazing, what else have I tried to include in this variety?

I wanted a reasonably small plant that was productive.  I figure people have less land these days so need small plants that are highly productive.  While 12 foot tall monster plants such as the Giant Inca White corn is spectacular to look at, it is not practical for Suburban Joe to grow in the corner of his yard.  The Immali Corn only grows about 5 foot tall.  It is not a dwarf plant, but it is not a giant either, I think it is a nice manageable compact size.

I also wanted to create a variety that would be productive.  No point having a variety of corn that only produces 1 or 2 cobs per plant.  So far the Immali corn has produced an average of 4 cobs per plant.  I always plant corn too close and the weather is not always kind to corn, given better conditions and more space I think it could average a few more per plant.  Each stem produces 2 good sized cobs on average (some only 1, others 4), but then this variety is very prone to tillering (growing several stems).  This is probably a bad thing if you plan to harvest using a combine, but it is a great thing for home gardeners who harvest by hand.  It essentially means you get several times the corn from the same amount of space.  I am deliberately selecting for plants that produce more tillering as it is this trait that has helped raise the average number of cobs per plant.


As well as a great tasting corn that is productive and takes up little space, I wanted something that was good to look at.  The cobs needed good colour, which was the primary reason behind this project.  One of the bonuses to using a coloured landrace as one of the initial stock was that the tassels sometimes are purple, it makes the plant look a bit more ornamental.

Some of the cobs also display coloured silk.  I do not know if I will be able to keep this trait in this variety, but I will if I can.  It is one of the least important things I would like in the variety, but it does add something special to it.


Where can you get Immali Corn seeds?

This variety is reasonably stable now.  The last two times I have grown it I have only seen one plant that was taller than normal and the cobs all look and taste the same.  Seeds are now available through my For Sale page.

I think that you should breed some type of vegetable that you like.  Perhaps don't start with corn unless you are already experienced in breeding and saving seeds, perhaps start with a tomato or some beans or something simpler like that.  You don't need any fancy equipment, I certainly don't use anything special.  You don't need formal training in Botany or Horticulture or Genetics like I have, but you can still produce something amazing that can be treasured and passed on to others. 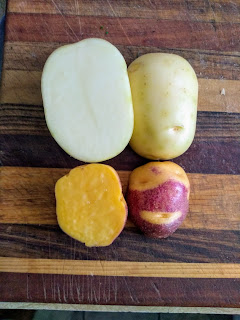